Visiting Tallinn, Estonia in One Day

While I was studying abroad in Sweden, a group of us took a two-day cruise ship to Tallinn, Estonia. Estonia seemed like a hidden gem. I especially loved the medieval structures and the view of the sea. The cruise ship (Baltic Queen – Tallink) was 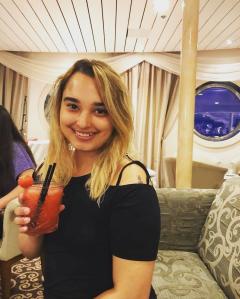 Once in Estonia, we had a tour lined up, however, about 15 minutes in, the group decided to take our own tour and get lunch. The tour we originally went on was found using a simple Google search.

One of my favorite parts of the trip was finding a bookstore that carried the Harry Potter series. I love collecting the series in different languages, but I was already WAY over budget, so I decided not to buy it. However, I did buy Harry Potter and the Sorcerers Stone in Swedish, and the cover is beautiful!

A friend and I separated from the group and searched for some of the hidden treasures in Old Town. We were really excited to see some of the medieval structures. I hope to visit again!

2 responses to “Visiting Tallinn, Estonia in One Day”